Historically, ecologists have debated the relative importance of dispersal and local species interactions (such as competition and predation) in structuring biodiversity. Recent advances have shown that these two processes often work in conjunction to produce surprising results, yet most research has remained focused on local interactions. This is particularly true in the case of global change studies, where scientists have focused on how changes to temperature or rainfall alter competitive dynamics. In this study we use common milkweed (Asclepias syriaca) and its community of specialist herbivores to understand how temperature change will alter insect communities through effects on both local dynamics and dispersal among milkweed patches.

We accomplish this by creating milkweed patches with known abundances of herbivores that are adjacent to unoccupied patches at various distances. Both the focal and unoccupied patches are surrounded by an insect net enclosure, and both are either warmed (ambient +2.5°C) or established as controls (ambient temperature).  Our results will show how warming effects the impacts of herbivores on plants and on each other, and how these impacts are influenced by warming-induced changes to dispersal rates. This will be one of the first experiments that quantifies the effects of warming on biodiversity via its independent and interactive impacts on local interactions and dispersal. 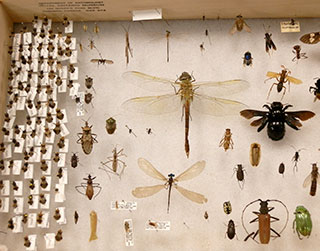