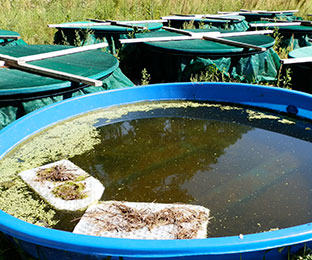 Our primary objective is to understand how competition and other ecological factors influence the evolution and expression of differences between the sexes. A focal species are red-spotted newts, a common salamander that exhibits seasonally and environmentally dependent expression of sexual dimorphism. Using artificial ponds, we manipulate densities of newts and other species to investigate the effects such factors have on sexual dimorphism.

Last year, using artificial ponds, we crossed a newt sex ratio manipulation with fish presence/absence, measuring sexual dimorphism in newts. This design allowed us to measure an effect of fish competitors on newt sexual dimorphism, but allowed little power to measure intraspecific effects (replication was 15 newts/tank). This year have planned a simpler experiment (no fish, fewer tanks), but will have a higher density of newts. This design will allow us to measure ecological character displacement between the sexes, a process which is theoretically possible but for which there is little empirical evidence.