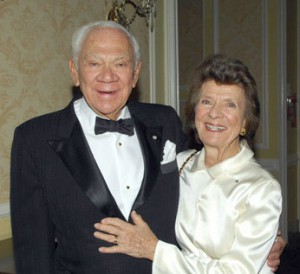 In 1995, Drs. Murray and Marvelle Koffler generously donated their 350-hectare equestrian estate, Jokers Hill, to the University of Toronto, which now forms our Koffler Scientific Reserve at Jokers Hill. The gift made the University one of the largest landowners on the Oak Ridges Moraine—and steward of a site of regional, provincial and national significance.

Dr. Murray Koffler had been searching for a country place when realtor Moffat Dunlap told him about Jokers Hill. For Murray, the prospect of country living evoked a summer from his youth, when he worked on a farm, “pitching manure and milking cows; it was a fantastic experience because I was a city boy.” He wanted his own children to be exposed to country living and to the openness and freedom that could be found at a place like Jokers Hill. Early on, the

With the Shoppers Drug Mart retail chain growing rapidly in the 1970s, the Kofflers also relied on Jokers Hill for entertaining a wide circle of friends, international dignitaries and business associates. An avid horseback rider, Murray made the property available for the Continental Championship of North America, a major, international, three-day, equestrian competition supervised by HRH Prince Philip, then President of the Fédération Equestre Internationale. Captain Mark Phillips provided advice on course design and construction.

Among many guests were former Prime Minister Pierre Trudeau and his wife Margaret, whom the Kofflers had come to know well. During one weekend visit for cross-country skiing, Trudeau was pressed into service to flip pancakes, which were being served with maple syrup made right on the property.

Between social events, the Kofflers became increasingly enchanted by the natural beauty of the property. Their routines included family picnics, fishing, hiking, cross-country skiing and horseback riding along the kilometres of trails winding through the property – journeys of discovery that gave them an appreciation for the subtle texture of the land. “One of the most beautiful experiences,” Marvelle reflects, “has been watching our five children become totally linked to nature and the splendour of the surroundings.”

Rejecting the idea of ever developing the land, the Kofflers sought to conserve it. To that end, Murray wound up the gravel operation in the northeast corner of the property and restored the 30-hectare quarry with extensive tree planting. The Kofflers thought that they might gift the land to the province one day. “We knew we had something special,” says Murray. “Everywhere you looked there was something waiting to be discovered.”

At a 1995 dinner party at Jokers Hill, Murray fell into conversation with then UofT president Robert Pritchard. Hearing the story that the Province of Ontario did not have the finances to manage the property as a park, Pritchard suggested the Kofflers give the land to the university. “I stuck out my hand and said, ‘Fine, you’ve got it’.” Under the transfer agreement the university formally took possession in 1995 and the Kofflers leased back the main house, which they continued to use until 2006.

We recognize and thank Murray and Marvelle and their family for their numerous contributions and leadership, and generous donation of Jokers Hill Estates.

“We didn’t realize the land’s tremendous potential in terms of its importance for scientific study,” Murray once remarked. “We never thought we would get so much pleasure from seeing Jokers Hill evolve the way it has. We’re very proud.”

Read about the Kofflers and U of T here.